Could the tielle be the next must-try street food?   It’s an olive oil bread dough pie of octopus cooked in a spicy tomato sauce with garlic, saffron, paprika, white wine, ideally local sweet Muscat de Frontignan and eminently portable I’m fascinated by the tielle, as they are so singularly associated with Seté, a charming Mediterranean town , not unlike a Gallic Venice.    The story goes that they were brought to the town by the Cianni family from Italy back in the 1930s though it is likely that the recipe derives from Spanish empanadas.   In 1937 Andrienne Verducci opened the first commercial tielle operation and her grand-daughter Sophie still operates it today with the pastries being cooked, rolled out and made in one half of the shop. 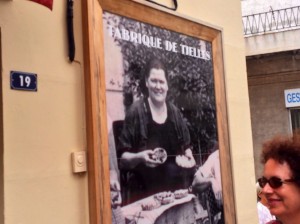 This was only one highlight of a brilliant food tour by Nancy McGee of Absolutely Southern France which took in many of the most interesting artisan food producers in the market such as Arnaud of Brown Sugar millefeuille maker, Sophie who marinades her own olives, Frederic’s superlative class extra heritage tomatoes and vegetables.   I learnt that monkfish is displayed belly up to best show off its liver necessary for preparation of bourride. 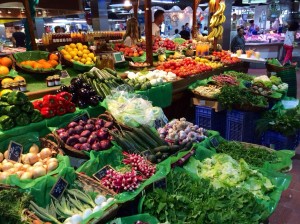 I was fascinated to understand how oysters are cultivated in the Etang de Thau: the baby oysters are cemented onto rods attached to “benches” which are lowered into the sea.   As there is no current, the oysters grow especially quickly and become more plump. Of course, we tasted some oysters too, chewed to better appreciate their taste rather than swallowed.

Visiting Fromagerie Lou Pastrou whose owner Mr Cailhac’s family are one of only five Roquefort producers was another highlight.   Nancy showed us the polite way to cut Roquefort in diagonals to ensure no-one gets too much of the salt crusted rind nor hogs all the creamy centre over a couple of glasses of Viognier named after Thomas Jefferson.   We learnt too that Seté had become a critically important trading centre during Louis XV reign due to its position at the source of the Canal Midi where it meets the sea and many of the embassies had been in Seté rather than Paris, which presumably explained why Thomas Jefferson found himself there. 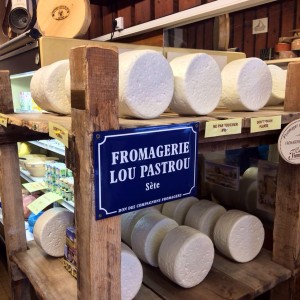