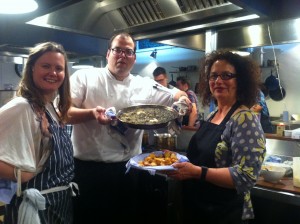 London’s first cooking school dedicated to paella is run by a group of exuberant chefs from Valencia and Columbia at the London Cooking Project in Battersea.

I was intrigued to hear the origins of paella are in the union of two cultures who settled in Spain. The Romans who brought the padella pan and the Arabs who planted rice in Valencia in 10th C. It is a lively class with a quick demo followed by hands-on cooking in a professional kitchen. They offer team building courses too.

For tapas we made double fried patatas brava with a wickedly chilli rich sauce and aioli using whole egg and a hand-blender very niftily to lift the mayo. The black rice paella brimming with squid and prawns was a toothsome, full-on flavourful dish. Good advice with practical explanations as to differences between risotto and paella and why the latter should not be stirred too much.

I learnt that the “socarrat” similar to “tadig” the crisp, caramelised bottom crust of rice at the bottom of the dish is venerated by the Valencians and how to ensure it is achieved. Each Monday evening class offers a different tapas and paella.

Dinner was highly sociable at a long table with much sharing and comparing of takes on the black paella.

Wow, what an exhilirating few days in Tenerife. Ye

Back where Dad @bvpainter courted my late Mum @bar

With my favourite men in the last stretch of celeb

Who wants to join me for dinner with @massimobottu

After an appropriate repose in @taubenkobel lush,

How exquisite is this? Morel, sweetbreads & fava b

Wow, I’ve been so mesmerised by the beauty & the

Special supper for @suffolkandscones who has creat

Memories of @cedricgrolet tea. All in a day's work

What better than combining a historic cafe with ra

When life changes at 60. Feel a bit shy sharing t